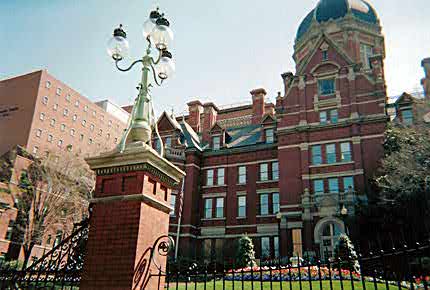 In the spring of 2004, Watts Restoration was hired to perform an exterior restoration to the Johns Hopkins Hospital. Four buildings were scheduled for restoration, including the Broadway Buildings (Wilmer, Billings, and Marburg) as well as the Henry Phipps Psychiatric Clinic. The initial construction on the Broadway Buildings was completed in May 1889, and the Henry Phipps Building was completed in 1913. These buildings were built with brick using green sandstone for the trim detail.

In June of 2004, an investigation by Kann & Associates, led by Mimi Giguere, began to determine the scope of work needed for the restoration of these buildings. Initial testing revealed past problems including inappropriate cementitious patching causing accelerated deterioration to the stone and a failed attempt to inject micro cracks with epoxy, which had discolored and no longer matched the stone. In addition to the existing problems, architectural firm Kann & Associates along with Watts Restoration determined the building had a number of other problems. The inspection of the buildings revealed severe stone deterioration, including spalling & delamination. It was necessary to sound all of the stone to determine the severity of the deterioration. The scope of work for all buildings included substantial repointing of brick and near total repointing of sandstone trim. This particular sandstone develops a very thin weathering layer on the surface, which is independent of the bedding planes and eventually delaminates. Much of this weathering layer was gone or delaminated. Cracking on the bedding planes was also present, often hidden behind the delaminating weathering layer. These conditions required extensive patching. Kann & Associates specified a custom engineered Jahn M70 Sandstone repair mortar for the repairs of the sandstone.

The CSP Color Lab was called upon to handle the color matching for the wide range of colors for the sandstone repairs. Extensive matching was carried out including use of multiple Jahn Mortar colors and Silin Lasur Mineral Stains to produce additional color variation. It was extremely important that the color of the sandstone trim not become overwhelming in appearance.

In addition to the masonry restoration, all four buildings also had their slate roofs and copper flashings replaced, and decorative metal finials and cupolas on the roofs were repaired. Restoration included the dome of The Johns Hopkins Hospital, which is constructed of lime of Teil. Because lime of Teil no longer exists, CSP developed a custom Jahn Mortar designed to be compatible with the existing lime of Teil block. This mortar was used to reconstruct the damaged areas and to cast new block for replacement.

CSP would like to thank Kann & Associates for specifying Jahn Mortar for this project, and to Watts Restoration for professionalism and excellent workmanship. It was a pleasure working with both companies.